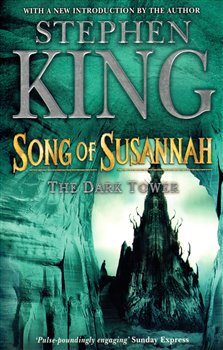 Song of Susannah continues directly from the almost literally cliff-hanging epilogue to Wolves of the Calla. Meanwhile the penultimate instalment in the Dark Tower septet follows three interlocked storylines. Roland and Eddie in New England, where they undergo the firestorm of the book’s only major action set-piece, Jake and Father Callahan hot in pursuit of Susannah in New York, and Susannah herself, together with her alter ego Mia, struggling with probably the strangest pregnancy in all fiction. Her travails certainly make the New York horrors of Ira Levin’s Rosemary’s Baby seem almost mundane. The novel is not complete in itself, but leads to a duel climax-cliffhanger leading directly into the final volume, The Dark Tower. While the journey itself is compelling and the finale riveting, it is Stephen King’s imaginative boldness which make this episode so remarkable. Stories about storytelling have become increasingly common in modern fiction, with books within books and fictional authors being central to such metafictions as Christopher Priest’s The Affirmation and Jonathan Carroll’s The Land of Laughs. King though takes the process further, writing himself into the saga, playing ingenious games with what the public knows of his life, even to his famous near fatal accident in 1999, and in a breathtaking achievement weaving the 34 year long writing of this series of books into its own fabric. The shocking sting in the final pages mean all bets are off for the epic final volume.