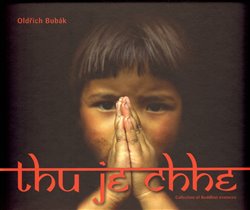 At the counters of bookshops there can be found a vast number of books that were written by people of great spiritual knowledge, and books that were written by great Buddhist philosophers from various countries of the world in various times. These books are ones of those we call “jewels of wisdom”. For more that fifteen years I have been visiting Buddhist countries – often even several times a year – and during this period I have got an incredible amount of photographical material, which I mainly use for lectures I organize for a wide range of audiences not just in the Czech Republic but also in foreign countries. Most of them keep asking me to publish them in the form of a book. Motivated by these frequent and sincere requests I have gathered together over a hundred and eighty pictures showing views of the Himalaya from Tibet, Sikkim, Bhutan, Nepal. I added several popular shots from other Buddhist countries of south-east Asia. I wanted them to be representative, contain a strong message and, moreover, reflect the richness, variety and diversity of these regions. However, having finished my work I missed something…The two-dimensional pictures lacked a third dimension – a spiritual cover. That is the reason why I decided to “cover” my pictures in a collection of Buddhist essences I had chosen from the above mentioned “jewels of wisdom”. Thus I would like to create a “bridge” between the photographs and readers. Through these essences I want to share with the public and dharma students various options and views that occurred in front of me as well as an obviously simple while nevertheless complicated base of the main Buddhist ideas. For me it is a certain way of how to express my gratitude for the answers I found in this rich and diverse tradition, which explains the title „Thu-dže-čhe“, which in Tibetan means “Thank you” or “I am grateful to you”. Buddhism cannot be fully explained, not even in tens of books, so I can only hope I have managed to give a meaning to the outlines of the Buddhist world. To be able to find these outlines I have chosen a glossing and intimating way of the dialogue with the reader, combining the wisdom of the wisest ones and a point of view of a modest observer. Those of you who are very educated or spiritually pure please accept my apology as – when reading these selected materials – you may see them as insufficient and incomplete. At the end of the book there is an index of authors, brief notes on them, bibliography and a glossary, so that the book was useful in various ways. I am aware of the problems people have to solve in our society. Pressure, tension and speed of modern life do definitely not create optimal conditions for relaxation and meditation. For this reason I modestly wish this composition of quotations, reflections and pictures to give the readers an opportunity to have a break from their everyday reality. I would like them to find here a real benefit in the form of rising peace and mutual understanding – understanding the world, people around them and themselves. I wish even more than that. I wish them to find even a kind of inspiration leading to the development of their heartiness, positive thinking and wisdom, since as a lama says:

“A man is not wise because he knows a lot. A man is wise when he is able to spread his knowledge. A part of ignorance is a narrow mind, which – regardless the amount of the knowledge – lacks the ability to accept anything new. Wisdom, then, is a feature of an open mind and nirvana, in other words the liberation from hatred, craving, delusion and prejudices, it describes a total openness towards everything that life can offer us.