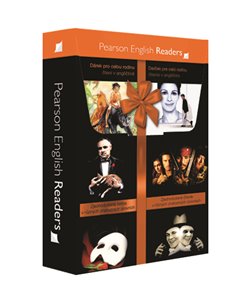 Robin Hood: Classic / British English. 43 Pages. The story of Robin Hood is very famous. Robin Hood robbed rich people and gave the money to the poor people. He loved adventure, and he was the best fighter in England. The greedy Sheriff of Nottingham hated Robin, and the beautiful Lady Marian loved him. His most famous adventures are in this book.
Dracula: Classic / British English. 72 Pages. Count Dracula is a vampire. He drinks people’s blood. He lives in a lonely castle in the mountains of Transylvania. But then he comes to England and strange things start happening. People change. People become ill. Professor Van Helsing knows about vampires, but can he stop Count Dracula?
Godfather: Contemporary / British English. 72 Pages. Don Vito Corleone is the ‘Godfather’ of New York’s richest Mafia family. His business is built on fear and murder. Vito’s son Michael wants a quiet life away from the family business. But that’s not easy, and slowly Michael becomes the most dangerous gangster of them all..
Death on the Nile: Contemporary / British English. 104 Pages. Linnet Ridgeway is rich, beautiful and clever. She appears to have everything. But Linnet also has enemies. When she is shot dead on a passenger boat in Egypt, it is fortunate that Hercule Poirot is also on the trip. But even for the great Belgian detective, this is not a simple case.
Saving Private Ryan: Contemporary / American English. 120 Pages. Saving Private Ryan – one of the greatest war films ever made! Steven Spielberg – Academy Award® winner for Best Director! It’s June 9 1944, three days after D-Day. On the orders of the government, Captain John Miller and his men go to look for Private James Ryan. They must bring him home. But how many will survive the mission?