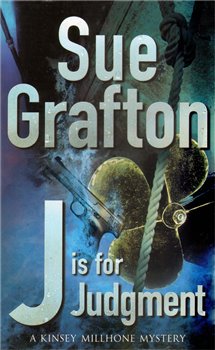 In her 10th alphabet adventure, southern California PI Kinsey Milhone is working again for California Fidelity, navigating her way through a plot-driven tale that will remind readers of her earliest appearances, despite Grafton’s deft introduction of new material. Shady financier Wendell Jaffe has recently been decreed dead, five years after his real estate empire collapsed and he disappeared from his beloved 35-foot ketch off the coast, an apparent suicide. California Fidelity has just paid his widow $500,000. But then Jaffe is spotted in Mexico with another woman. Kinsey’s investigation lands her in some tough spots–such as a drunken stranger’s hotel room where she pretends to be a hooker–gets her shot at and leads to a dramatic resolution at sea. It also introduces her to a genealogist who requires Kinsey to revise her notion of herself as an orphan alone in the world. While maintaining full control of her plot’s variously colored threads, many of which are tied to Jaffe’s family (his 18-year-old son is on the lam from a murder charge), Grafton cameos such familiar characters as Kinsey’s octogenarian landlord Henry, his older brother William, and Rose, the neighborhood bar owner. But the spotlight remains on Kinsey who, without a love interest to distract her, sticks to the case at hand and tries, with limited success, to assimilate the existence of a not too distant family, whom readers will likely learn more of in "K." 500,000 first printing; major ad/promo; Literary Guild selection; author tour.