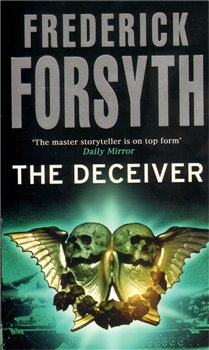 Forsyth’s stalwart tribute to the spies who came in from the cold: four thriller-novellas featuring the intrigues of British superagent Sam McCready. With the cold war over, the Foreign Office has decided to retire its veteran spies, beginning with McCready, the "deceiver"’–head of Britain’s disinformation desk since 1983. McCready balks, demanding a hearing at which his assistant relates four of McCready’s most daring exploits. The first and longest, "Pride and Extreme Prejudice,"’ is at once the most suspenseful and melancholic. Here, McCready, having "turned” a top Russian general, sends spy-pal Bruno Morenz into East Germany to accept the Russian’s latest gift–the Soviet Army War Book; but, unknown to McCready, Morenz has just killed a cheating mistress and is cracking up. When the East Germans catch on to Morenz, who panics into hiding, McCready must sneak across the Iron Curtain, find Morenz, retrieve the book, and deal–irrevocably–with his friend. Also subtly shaded with the grays of spydom is "The Price of the Bride,” in which McCready learns from a pro-West Soviet source that the CIA’s new prize, defecting KGB colonel Pyotr Orlov, is actually a double agent bent on falsely implicating a top CIA-man as a Soviet mole. It’s a masterful spy-vs.-spy battle of wits as McCready sets out to unmask the Russian and save the marked Yank. Less enthralling but still offering solid action and brilliant local color are the two final tales, with McCready acting pivotal but minor roles as he displays his prowess against non-Soviet threats. In "A Casualty of War,” he foils an IRA-Qaddafi gun- running scheme, while in the semi-humorous "A Little Bit of Sunshine,” he foils a Cuban takeover of a Caribbean island. Not a sizzler like The Day of the Jackal or even The Negotiator (1989) but more resonant than either, with shades of le Carr‚ and Deighton: sophisticated, shrewd, roundly satisfying spy- stuff.