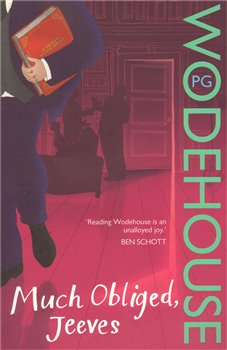 The prospect of being linked for life to a girl who would come down to breakfast and put her hands over my eyes and say "Guess who" had given my morale a sickening wallop, reducing me to the level of one of those wee sleekit timorous cowering beasties Jeeves tells me the poet Burns used to write about. It is always my policy in times of crisis to try to look on the bright side, but I make one proviso — viz, that there has to be a bright side to look on. . . .‘ Thus, Bertram Wilberforce Wooster — in mournful contemplation of many-headed crisis — somewhere short of the peak of his form.
And who would blame him? He has set aside a hectic schedule in the metropolis to offer his services in the political arena at Market Snodsbury. His best endeavours have gone awry, or agley, as he would put it. He is in the grip of a blackmailer; threatened, several times over for emphasis, with grievous bodily harm by the dreaded Spode; accused, with good cause, of theft; and staying with Aunt Dahlia whose house party includes two former fiancees both of whom are willing to sacrifice their present futures ‚to make him happy‘. It is a calamitous situation for which there could be but a single solution. Jeeves. Jeeves the Magnificent, than whose sleeve there is no sleeve so furnished with aces anywhere in. fiction, or in fact. .