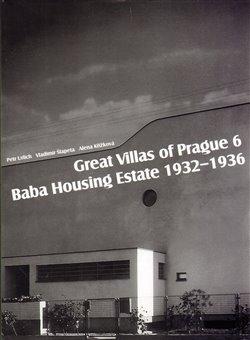 The Publishing House Foibos in cooperation with the District Government of Prague 6 has prepared a new publication focusing this time on the exhibition and realisation of Baba Housing Estate in Prague which arose from the significant interwar activity of the Association of the Czechoslovak Werkbund and it ranked among the most successful achievements of modern – Functionalist – architecture in erstwhile Czechoslovakia.

The publication represents a further contribution to the historiography of this extraordinarily fertile period of the Czechoslovak architecture in international context. It documents carefully the preparatory phase, urbanistic context and foreign relations, as well as it deals thoroughly with the Association of the Czechoslovak Werkbund and its important role in the Czech modern architecture.

In comparison with the previous two titles published both in 2000, the recent book concerns itself in more detail particularly with the role of builders, with their career and peripeteias of life linked to the realised exhibition of housing in 1932 and its later completion. It also contains a number of new and still unpublished archival materials, among others the texts of two radio addresses on the exhibition given by two renowned architects – Lubomír Šlapeta and Ladislav Žák.

The authors are Vladimír Šlapeta and Petr Urlich, both highly regarded experts, both professors of the history of modern architecture at the Czech Technical University Prague, Brno University of Technology and J. E. Purkyně University in Ústí nad Labem; the third author of the book is the young talented historian Alena Křížková.