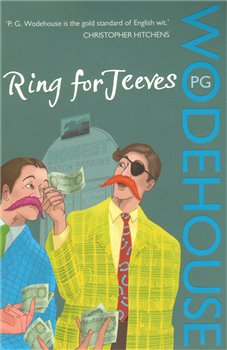 To William, ninth Earl of Rowcester, Rowcester Abbey was the dampest and most expensive of the stately homes of England. It was, as he glumly admitted, the prize white elephant of the herd. But to the impressionable American widow Mrs. Spottsworth, the Abbey presented itself in a very different light. To her it was a fragment of the historical past an edifice through whose corridors walked the ghosts of many centuries -the perfect setting for communicaLion wiih the spirit world. Bill believed there was a chance she might be persuaded to add it to her string of residences dotted across the face of two continents. Nevertheless, there were complications in the way of this happy conclusion. Bill’s fiancee mistrusted the motives of this attractive widow, finding it hard to believe that Bill’s earlier dalliance with her had been as innocent as he red-facedly protested. There was also Captain Biggar. He arrived hotfoot on the trail of a bookie and his clerk who had welshed him at Epsom and who had most mysteriously gone to ground in the Abbey. His inquiries in this connection not only threatened the negotiations of sale but even the integrity of a noble house. And finally there was the rain which at intervals dripped inexorably from the rafters to be trapped in buckets below. Neither Mrs. Spottsworth nor her fibrositis could tolerate damp in any form. In these difficult circumstances it is fortunate that Jeeves on temporary loan from Bertie Wooster— should be presiding in the Rowcester pantry. Fortunate, because wherever Jeeves’ fish-nourished brain exerts its influence no problem is insoluble, no situation beyond hope. This is a new Jeeves novel in the classic Wodehouse manner.