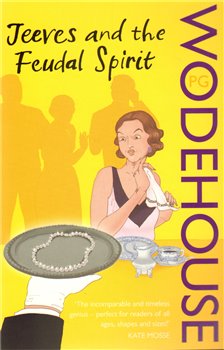 It was Bertie Wooster’s opinion that the moustache he had recently allowed to sprout from his upper lip did something for him. Nor was he alone in this view; the moustache had other supporters among his circle of friends and no less an authority than Florence Craye had signified her approval of it. But there were some equally outspoken warriors in the opposing camp. Jceves did not approve of the new growth and expressed himself in such terms that some feeling of coolness between him and Bertram could not fail to result. Then the thunder-clouds began to gather from another direction and Wooster thought to face the impending crisis alone. But not so, Jeeves; he was not the man to allow a domestic tiff to come between him and the common enemy. The feudal spirit burned bright within him and he rallied to his master’s cause as resourcefully and imperturbably as ever before. Jeeves and the Feudal Spirit is a novel in which Jeeves and Bertie Wooster return to the Wodehouse scene at the very top of their form.