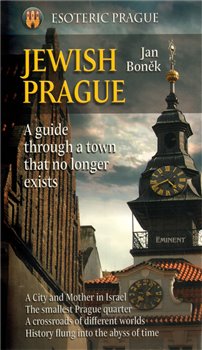 The town that vanished more than 100 years ago and yet used to be one of the most prestigious and oldest centers of the Jews in Europe. According to legend, this is where the Israelites came after their legendary temple of Jerusalem was destroyed, and it became their "Mother Prague", "City and Mother in Israel." Starting in the 16th century, it was simply called the Jewish ghetto that, in the middle of the 19th century, became the fifth Prague quarter and was renamed Josefov after Emperor Joseph II. In the end, it turned into a refuge of the Prague poor. The Jewish Town was delimited by the Vltava River on one side and the closely watched border with the Prague Old Town on the other. On a rather small area of about 93,000 m2 were about 30 streets, two tiny squares, one palace, several hundred variously connected dwellings and of course synagogues and the famous Jewish Cemetery. It was an overcrowded place full of mysteries and secrets. The Jewish Town had its rises and falls, facing repeated pogroms by its Christian neighbors, looting by armies and catastrophic fires and floods. A few times the local Jews were almost exterminated by the plague and forced to leave Prague and the country. Yet, the ghetto always recovered from it, and its religious life carried on. At the end of the 19th century, Prague fell in love with "modernization." Imitating Paris, where the historical center had to yield to boulevards and luxurious development, Prague councilors approved a more moderate version of the alarming redevelopment plan that demolished "only" the old ghetto, ugly to some but nevertheless having a special charm and full of esotericism. Except for several buildings, the Jewish Town vanished from the face of the earth. Who would have thought back then that with every demolished house, a major part of our history is lost forever…