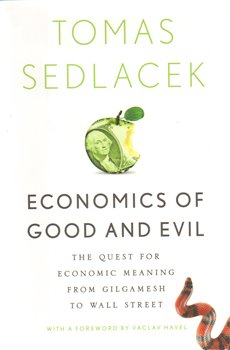 "Tomas Sedlacek proposes no less than a ‚humanomics,‘ a view of our fate in this world of scarcity that takes account of human stories and philosophies. Economists have crippled themselves by their lack of scholarly breadth, and their ‚scientific‘ disdain for human words. Sedlacek, who ranges from the epic of Gilgamesh to the movie The Matrix, cannot be accused of lack of breadth. What is most impressive, though, is his depth, drilling down into the soul of economics." -Deirdre McCloskey, author of Bourgeois Virtues: Ethics for an Age of Commerce and The Cult of Statistical Significance.

"There has long been a profound moral drive in Czech culture, seeking an ever larger view of the human, and trying to break through conceptual barriers to do so. In this sinewy and marvelous voyage of discovery, Tomas Sedlacek calls us all to think more imaginatively, more fully, and more concretely about economics than we have done for many generations. Many thinkers, including not a few economists, will be stimulated to new explorations by this book." -Michael Novak, author of The Spirit of Democratic Capitalism.

"Economics of Good and Evil is an enchanting tour de force, offering the general public an unusual, erudite, and riveting view of the world. Scientists and scholars can choose how to read this book: either condemn it for its lack of a rigidly and traditionally scientific approach, or accept it as an invigorating elixir providing inspiration and vision for further study. I take it as the latter and I am certain the public will too." – Jan Svejnar, Professor of Business, Economics and Public Policy, University of Michigan.

"A widely admired economist who sits on the National Economic Council in Prague radically rethinks his field, challenging assumptions about the business world in this work, a bestseller in the Czech Republic."- Publishers Weekly.